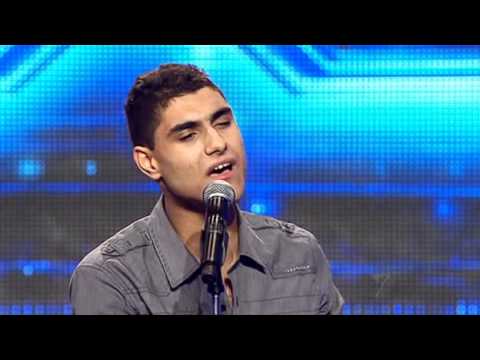 PLUCKY Melbourne singer Emmanuel Kelly is dreaming of a recording career after moving tough judges to tears on ‘The X Factor’.

Emmanuel and his brother Ahmed were adopted from Iraq, both suffering limb deficiencies as a result of chemical warfare.

They were abandoned at an orphanage and rescued by Ms Kelly, who is also the guardian of the once-conjoined Bangladeshi twins, Krishna and Trishna.

Emmanuel said it was “more than magic” to be on X Factor”. ”

Words could not describe what I was feeling on that stage,” he said. ”

When I got up and started singing, there was nothing else. Adrenalin just took over. It was just a blur.”

Emmanuel said he believes he had a gift.

“Singing is what I love doing and singing is the only thing I want to do,” he said. ”

I know plenty of singers that are 50 times better than I am, it is just they chose not to follow that path. Singing is the path I want to follow and some doors have opened up now and I just want to push even more. “I just want to sing and I want to make people happy.”

Kelly said his damaged limbs had not held him back and that he was not looking for sympathy. “I have actually been through nothing compared to some of the other kids I have met and mum has brought out,” he said. “I don’t want people to look at it (his performance) and go: ‘Wow that is brave.’ I want people to look at me and go, ‘Wow, he has got a really good voice’ or ‘Wow, he is going to go far in life,’ not, ‘Wow, that is brave for him to do that’.”

Emmanuel’s rendition of Imagine earned a standing ovation from the judges and packed audience. Ronan Keating was full of praise for Emmanuel who has now moved into the next round of competition. “I don’t think I’ve ever been moved as I was by that performance,” he said. Emmanuel auditioned for Australia’s Got Talent last year but did not make it on to the show