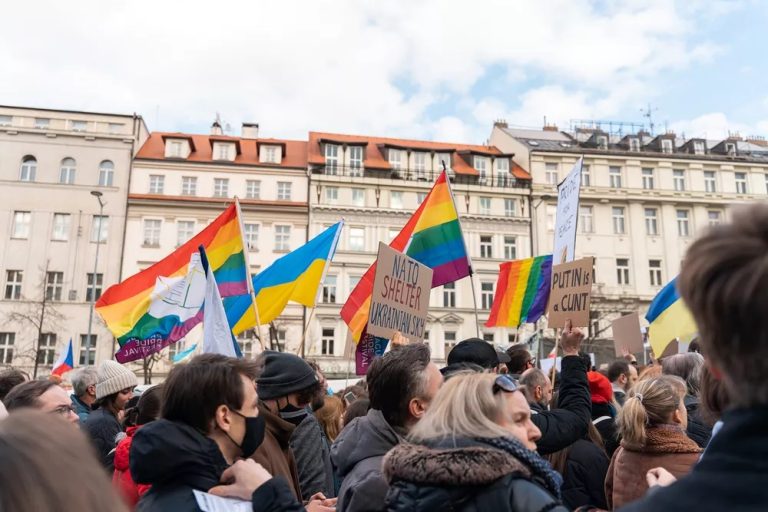 As the world continues to watch the ongoing Russian invasion of Ukraine with horror, one question continues to plague the minds of queer activists in the West: what about the LGBTQ people?

Russian leader Vladimir Putin has a long record of oppression of the queer community from public humiliation and imprisonment to encouraging mob violence. Filmmaker David France documented Putin’s anti-gay campaign in his film Welcome to Chechnya [now streaming on HBO Max] which detailed queer oppression in the titular Russia-allied republic.

Will Ukraine face the same fate? We sat down with France to discuss the situation for LGBTQ people living in Russia and Ukraine, the state of the underground resistance, and how Vladimir Putin has declared an all-out war on queer people. France also reveals how the same forces of oppression have infected the United States, and how preserving democracy may hold the only hope for LGBTQ people in the future.

Are you in contact with the Rainbow Railroad (an underground resistance that smuggles queer people out of Eastern Europe) in Ukraine?

I did just speak with David Isteev [from Welcome to Chechnya] who is doing rescues in the Caucasus. He wanted to talk about what was happening to queers in Russia because of the invasion.

So what’s the situation there?

They are despairing. I’ve never heard the kind of grimness from the folks I know that we’re hearing now. The entire leadership of the LGBTQ movement in Russia is now outside Russia.

They’ve all had to flee?

Correct. Not just because of the invasion, but there was also a crackdown in the months leading up. [The Putin government] has made it impossible for queer leaders to do their work, and they’ve strangled their source of funding. Now the borders are closed, so it’s not possible to move money into the country. It’s not possible to access the money they have in the country. And the people outside the country trying to help are delivering money to the border in cash.

I’m sure that carries a whole other set of risks.

Yes. And if they bring money in US dollars, is it possible to change it into rubles? And if it is rubles, it’s worth almost nothing.

So is the solution to escape?

Well, here’s another problem. It’s not possible to enter most countries without proving vaccination status, and with an approved vaccine. Almost nobody has approved Sputnik 5, the Russian vaccine, because they’ve never produced reputable data. So if you have Sputnik 5, you’re not getting into Europe.

Putin’s persecution of LGBTQ people is nothing new. Is this personal for him?

It is a strategy that works. 10 or 15 years ago, he discovered the more he spoke against queer folks, the more he generated a divide that turned people against people, instead of against the government.

Putin said he wants to install a new government in Ukraine. How safe is it to believe he would install a leader similar to the one he appointed in Chechnya, Ramzan Kadyrov?

Well, Putin has been using an anti-queer plank in Ukraine for the past decade alleging that if Ukraine joins NATO, they will have to recognize marriage equality. And in some corners, it has worked. It worked with the Russian Orthodox Church—in the past week, they’ve come out in favor of the invasion and against “the gay agenda.”

So what you’re actually saying—Putin’s fighting an international war on LGBTQ people?

Well, from what I understand from my Russian friends is just the opposite. The people they talk to, family, for example, don’t believe [the invasion] is happening.

They don’t believe the war is real?

Correct. They have no access to Western or social media. The Kremlin made it a crime to report on Ukraine. People don’t have any reason to believe there is a war unless they have children coming back in body bags.

That’s a total page out of the Stalinist playbook.

That’s why it’s an Iron Curtain—you can’t communicate. And so many young Russians have great experiences traveling across Europe. They’re very integrated into world culture. And those are the people protesting in little pockets here and there. But between 10-15,000 have been arrested. People are just disappearing for saying there’s a war.

So let me ask you then: there seems to be this link between autocracy and autocratic-type leaders and homophobia or anti-queer sentiment. Why?

People want to know what’s causing their problems. It just turns out that it works if you say queers are to blame. Since Putin started his return to power on the backs of the queer community, other leaders take note. Prime Minister Viktor Orbán is doing that in Hungary. It’s happening in Poland. It’s a successful campaign in Belarus. And Trump discovered you could do it here.

It’s a huge shock. Those of us that saw 50 years of LGBTQ civic engagement and thought it was a permanent victory are having to reckon with it getting rolled back. Look what just happened in the Virginia Governor’s race.

Or Florida. Or Texas. Or Georgia.

Mmhmm. And what’s happening to queers in Ukraine—many queer Russians had fled there. The LGBTQ community had a stronghold there, and now that’s at risk. Putin’s state department issued a “kill list” for invading forces to round up and kill political leadership in the country as well as LGBTQ leaders. They gave the hit list to an elite force out of Chechnya. And men can’t get out of Ukraine. They’re terrified.

What’s happening now has people scared. Will Putin go for broke? Will he level Kiev? Will flatten Odessa? Will he drop a nuclear bomb?

Well, if he drops a nuclear bomb, we all have a lot more to worry about.

Yes. And that’s why everyone is praising the Ukrainian resistance, but talking about [Putin’s] “off-ramp.” He may feel like he has no choice but to throw everything at it. And if the West gives him Ukraine, what does that mean [for the rest of Eastern Europe]?

Is there anything we can do in the West?

We need to start talking about how queer panic is being weaponized as the chief articulation of Putin’s dissent for his own military actions. Continue to support the Rainbow Railroad. They’re not solving problems, but they are creating a pipeline for flight. That saves lives. And look to LGA Europe and LGA Asia. They’re doing important work too.

So then, how much of the future of LGBTQ equality is tied to democracy?

It is plain that where democracy is strong, our movement has been successful. There’s a 100% correlation. But crushing democracy in Ukraine will only harm queers there along with everybody else. Putin and his oligarchs have sucked trillions out of the economy and done nothing for the Russian people.