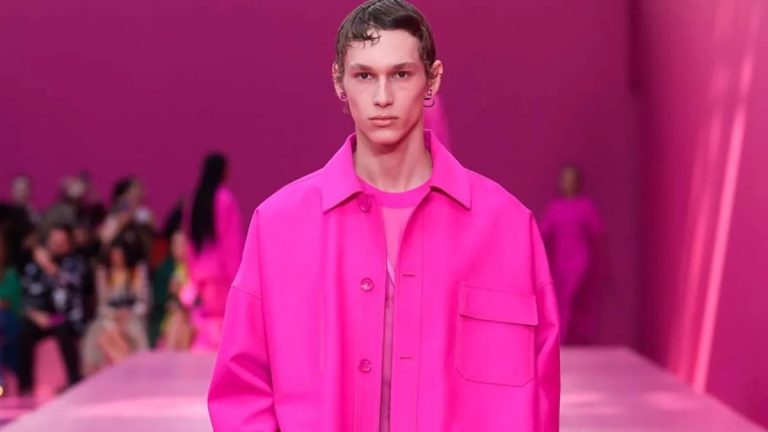 The 80-plus looks captured all the moods of pink while highlighting the rigor of Pierpaolo Piccioli’s couture-like techniques.

“We see you, we feel you, we love you because love is the answer always,” Pierpaolo Piccioli said in a voiceover message to the people of Ukraine, before the start of Sunday’s Valentino show, where he turned Le Carreau du Temple into a pink scape and painted the runway with love.javascript:window[“$iceContent”]

Valentino may have been built on red but for fall 2022, at least, the house hue was an intense, magenta “Pink PP,” a new Pantone color created by Piccioli himself and worn by “Euphoria” star Zendaya in the front row (that’s one way to start a trend).

“I wanted to work like a monochromatic artist,” the designer said during a preview, musing about Lucio Fontana’s ability to create gesture and dimension in his monochromatic paintings. “When looking at one color, you have to go deeper than the surface, to texture, cuts, silhouette, volume, and detail. Because I’m not a stylist, I like to be a designer,” he said, throwing a bit of shade on some of his peers, perhaps.

“Pink is a color I really like, and it’s also a color that can have different sides,” Piccioli continued, noting how it can be sweet, sexy, powerful, and rebellious.

Images of princesses, of Marilyn Monroe in “Gentlemen Prefer Blondes,” of Pussy hats and political power suits all came to mind watching the procession of pink, with occasional interludes of black, and most women’s with some men’s looks.

The lineup captured every mood while highlighting the rigor of Piccioli’s couture-like techniques in ready-to-wear. In a break from last season’s mostly casual wardrobe, these were elevated pieces that were also literally elevated, with models wearing tonal tights and towering platform boots.

Piccioli showed his range with soft volumes, as on a cape-back T-shirt dress that floated down the runway, and with more graphic pieces such as the edgy, abs-baring ballgown slashed and bow-tied over the torso and sleeves that had Zendaya’s name all over it.

Tailoring ran the gamut, from classically feminine to more utilitarian, from an hourglass coat with a looped bow at the waist, to an Haute take on a boiler suit with a plunging front.

Sweetheart dresses with curved necklines were a beautiful throwback, while a ruffled chiffon shirtdress with train worn over high-waisted trousers was a more masculine take on diva drama.

The details were something to behold — crystal embroidery as dense as rock candy on a bubble dress with slouchy sleeves, and as fine as cotton candy on a delicately knitted cape.

Three-dimensional flowers covered a mannish overcoat like a topiary, while black nylon floral macramé was cut into a sporty men’s jacket. Sequined cable knits and swingy T-shirts were also playful.

Piccioli worked with transparency on sheer embroidered tops for men and women (the designer stressed the fluidity of the collection).

A black trenchcoat with a floating panel of fabric had a beautiful sense of movement, while buttery black leather jackets, fleece hoodies, and pants should speak to the streetwear set.

Piccioli saw the possibility to shift perception, and it worked. Now if only he could manifest peace.

Models show off their assets in the latest Pride underwear