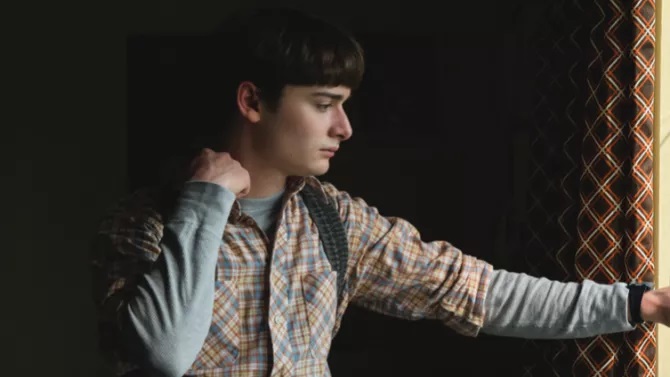 It’s been nearly three years since we last visited Hawkins, Indiana, the home of Netflix’s nostalgic sci-fi smash, Stranger Things. But even after all this time, it’s clear the series hasn’t lost its ability to be at the center of the cultural conversation.

With the initial episodes of the fourth, super-sized season hitting the streamer this past weekend, none other than sweet, innocent Will Byers (Noah Schnapp) has become the focus of a lot of fan speculation and online debate over something about the character that has (thus far) gone unspoken. And, no, we’re not talking about his bowl cut.

Ever since he was rescued from the Upside Down at the end of the first season, Will has had some trouble adjusting to life right-side-up, tepidly reintegrating into his group of friends. Sure, you could chalk that up to the fact that he saw some dark, horrifying stuff in that alternate dimension—we’re talking traumatize-you-for-life, Demagorgon stuff—but some viewers have wondered if maybe he’s struggling with something else: The fact that he might be gay.

Theories about Will’s sexuality started bubbling up seasons back when it became clear that he was jealous of the time his bestie Mike (Finn Wolfhard) and Eleven (Millie Bobby Brown) were spending together. In season four, Stranger Things appears to be fanning those flames of speculation, like the fact that, for a school presentation on heroes, Will chooses to discuss Alan Turing, the game-changing mathematician who was persecuted in the ’50s for being gay. There’s also a brief scene where Will reacts coldly to affection from a girl his age, not to mention his continued jealousy over the fact that Mike gives all his attention to Eleven.

So is Will Byers gay? Is he not? Does it matter that Stranger thing appears content with not addressing it head-on, instead of leaving it open to interpretation?  Unsurprisingly, there are more opinions about it online than there were theories about what happened to David Harbour’s Hopper at the end of season three.

Even the cast is weighing in. In a recent interview with Variety, Schnapp and Brown addressed the hot topic, discussing how the show’s creators and executive producers, Matt and Ross Duffer, have handled it thus far:

“I feel like they never really address it or blatantly say how Will is,” Schnapp said. “I think that’s the beauty of it, that it’s just up to the audience’s interpretation, if it’s Will kind of just refusing to grow up and growing up slower than his friends, or if he is really gay.”

“Can I just say, it’s 2022 and we don’t have to label things,” Brown opined? “I think what’s really nice about Will’s character is that he’s just a human being going through his own personal demons and issues. So many kids out there don’t know, and that’s OK. That’s OK to not know. And that’s OK not to label things.” In agreement, Schnapp added, “He’s just confused and growing up. And that’s what it is to be a kid.”

To Stranger Things‘ credit, it’s not as if the show is avoiding saying the word gay altogether.  Back in its third season, it sensitively handled Robin’s (Maya Hawke) coming out when she revealed to Steve (Joe Keery) that she’s a lesbian. That’s all to say that there is power in depicting a different kind of queer coming-of-age story, one where a character like Will is given space and time to explore his feelings, one where he doesn’t have to come out as anything in particular.

But there’s also the argument to be made that, in the case of mainstream media like Stranger Things, putting a “label” on Will can be hugely impactful—especially at a time when Republican lawmakers are pushing to roll back LGBTQ protections, trying to keep queerness from even being acknowledged in schools. It’s further complicated by the fact that, again, the show seems to be dropping hints that Will is gay without saying it outright. It’s like Stranger Things is trying to have it both ways: Satisfying an audience who is so eager for queer representation that they’ll pick up on the subtext, while also avoiding upsetting a portion of the audience who would argue against the inclusion of LGBTQ characters in media.

As the Variety piece reminds us, there are still two remaining feature-length episodes of the season to be seen (dropping July 2), so perhaps Will’s sexuality will be directly addressed then. In a social video for Netflix Mexico, stars Harbour and Wolfhard even hinted that audiences will “see soon” who Will is “interested” in. Are they, like so many queer fans of Stranger Things, picking up on the subtext? Or do they know something we don’t?

Until then, all we can do is speculate—well, that and take to Twitter to share our hot takes. Here’s what some viewers have to say about Stranger Things‘ decision to leave Will’s sexuality up to “interpretation” (for now).

These Celebs Were Packing Heat And Sex Appeal, Amongst Other Things