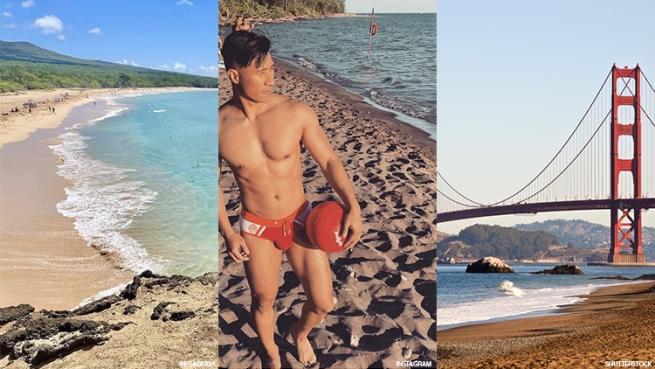 Clothing is always optional on these great LGBTQ+ beaches!

Summer is here which means it’s the perfect time to strip naked and hit the beach with friends, chosen family, and complete strangers of all body shapes and sizes.

While clothing-optional beaches have been popular in Europe since the mid-20th century, mainstream straight Americans generally were not as quick to embrace the idea of frolicking naked in public. Not so with many members of the LGBTQ+ community who nowadays use NSFW selfies like personal calling cards, and over time a constellation of seductive sandy spots along the shore has gone gay and come out of the closet with their visibility.

We’ve carefully curated seven locations we think are some of the best clothing-optional LGBTQ+ beaches in the U.S, just in case you have the itch to go free and natural in the sun this summer.

A strong word of caution before you go, though. Because laws change rapidly around public nudity, please take a moment to go online and check the rules before you publicly shed your skivvies this summer.

Now drop those drawers and keep scrolling for the top 7 clothing-optional beaches for gays in the U.S.

Miami’s only officially sanctioned clothing-optional beach, Haulover Beach is also one of the country’s most beautiful with its pristine sand and warm Gulf Stream waters. Located off State Route A1A/Collins Avenue and a mere 10 miles from Miami, you’ll find your fellow gays north of the North Beach Tunnel. This is a popular spot on summer weekends with hundreds of gorgeous bodies on display, so be sure to arrive early in the day to stake your space on the sand on the frequently patrolled beach.

Officially part of the Presidio, Baker Beach is just about as close as you can get to the Golden Gate Bridge, and provides some of the city’s best views of the landmark. And that’s a good thing since the beach is known for its frigid waters, dangerous waves and rip currents, and the occasional great white shark. This beach is about company and views, though, and on sunny days the local gay community can be seen baring all on the picturesque beach. The north side of the beach, nearest the bridge, is the gayest and the most clothing optional. Fun fact: Baker Beach was the location for the first Burning Man festivals, which are now held in Black Rock Desert, Nevada.

More than a hundred swimming holes, a gay-adored beach, and impressive climbing crags make Hippie Hollow a treasured star of Texas for the LGBTQ+ community. They say everything is bigger in the Lone Star State and we’d be hard-pressed to disagree judging from the bulging speedos on the hot bods decorating the shores of this gay-popular destination for sunning, swimming, and socializing. Hippie Hollow is on Lake Travis, a short drive off Interstate 35. The gay section is about a 15-minute walk to the left from the parking lot. For an extraordinary day at the beach, make for annual Splash Days, clothing-optional lakeside parties on the rocky limestone shores of the lake.

Make the most of a beautiful summer day with a trip to the Toronto Islands and the gay-friendly Hanlan’s Point clothing-optional beach. There’s also a bike path and a small amusement park if you’d prefer to keep your clothes on when mingling in public. Hanlan’s Point is a good place to hang out in a heat wave, with temperatures a few degrees cooler than downtown. The round-trip ferry ride provides the best view of the city’s waterfront skyline. The beach has a lifeguard during the summer season. Head for the far end to find lesbian and gay Torontonians catching the rays.

On Maui, the top gay sunning spot is peaceful Little Beach (nudity is the norm, although technically illegal). You’ll find the clothing-option beach about one mile south of the Maui Prince Hotel in Makena on the island’s southwest coast. Take all valuables out of your car and hike north up the rocky trail from 3,000-foot Big Beach to find its smaller sidekick; gay sunbathers congregate at Little Beach’s north end.

When it comes to clothing-optional beaches, it’s tough to beat Wreck Beach. The fresh breeze from the ocean serves as Vancouver’s own air-conditioning and prevents it from ever getting really hot or humid. Wreck is perched on the tip of Point Grey, looking out over the Burrard Inlet to the North Shore Mountains. Wreck is a taxi ride to the west of the city, at the foot of the cliffs that surround the University of British Columbia. The gay beach is found at the south end. Naked vendors ply the crowd offering water, beer, sandwiches, and a surprising array of narcotics. Ask any student how to get to the access paths that lead down to the water. If you have lots with you, leave your belongings in a locker in the Museum of Anthropology near the trailheads above.

One of the largest nude beaches in the country, Black’s Beach runs for more than a mile on the coast north of San Diego, under the Torrey Pines Bluffs. Officially part of Torrey Pines State Beach, Black’s is jointly by the state and the city. The distinction is important, as the nudity is only allowed on the state side, which starts about 100 yards south of the Torrey Pines Glideport. Getting here can be tricky, the quickest route is also the most treacherous—a steep rugged trail down a 300-foot cliff. Best to bring a sturdy pair of shoes or boots in addition to your flip flops and sandals.