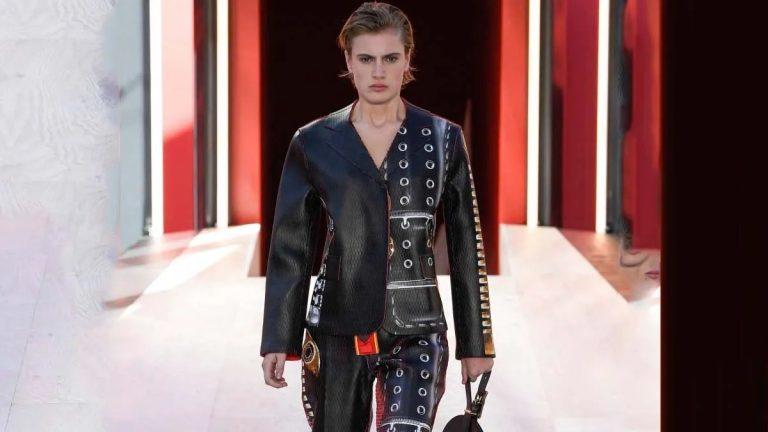 The last major show of the last day of Paris Fashion Week finally delivered the Indian summer moment the fashion crowd had been hankering for.

As a battalion of Hollywood A-listers filed into the courtyard of the Louvre museum for Louis Vuitton’s spring 2023 show, the scene could not have been more cinematic. Alicia Vikander, Cynthia Erivo, Jennifer Connelly and Ana de Armas were just some of the guests who took their seats on a circular platform sealed off with a red curtain.

Once the show got underway, the curtain parted to reveal a cluster of spiky red sails: a so-called “monster flower” set design created by artist Philippe Parreno. It set the scene for Nicolas Ghesquière’s Surrealist spring lineup, which placed details like zippers and snaps buttons under a microscope to toy with outfits’ proportions.

“Squid Game” star and Vuitton brand ambassador HoYeon Jung opened the show in a vest adorned with thick rolls of fabric and an oversized zipper, like a futuristic life jacket. A huge silver zipper tab clunked against the chest of a black dress, while overstitched black leather pockets dipped below the hemline of a varsity-style jacket.

Zips and buckles appeared as trompe-l’oeil prints on perforated leather suits, while giant silver buttons reflected the scene like a fish-eye lens.

Ghesquière used ultra-wide belts to cinch some of the looks and placed giant golden strap buckles on the shoulders of a black leather dress. Adding to the sense of distortion were the accessories, including bags in the shape of luggage tags and supersized versions of the brand’s signature monogram canvas key pouch.

As Ghesquière’s celebrity squad can attest, his outfits are not exactly designed for the supermarket run. Rather, his babes in Toyland had the look of stylish space warriors — and the hardware this season was fully weaponized.

Just before the end of the show, circular mirrors dotted across the set revolved, giving the front row a good look at themselves, and prompting more than a few guests to start filming their own images. It was a fitting end to a rollercoaster season that should trigger a bout of self-reflection if Ghesquière’s magnifying glass has anything to do with it.

TOMMY HILFIGER STORMS BACK TO NYFW WITH FALL 2022 RUNWAY SHOW: SEE ALL THE HIGHLIGHTS