These big ‘gay’ billboards are heading to Florida … and Don Jr. is raging 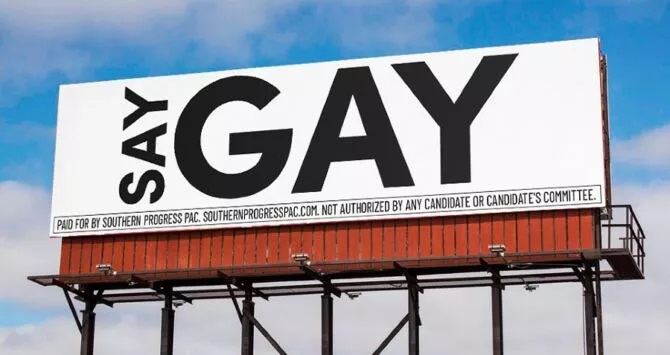 Billboards emblazoned with the word ‘Gay’ and the slogan ‘Say Gay’ is due to go up around Florida from today.

The signs are going up in response to the state recently passing HB 1557, the Parental Rights in Education” bill. It’s been more commonly dubbed the ‘Don’t Say Gay’ bill as seeks to ban the discussion of LGBTQ topics mainly at the primary grade level.

The legislation passed the Republican-held House and Senate and is now awaiting signing by Governor Ron DeSantis. He has indicated he supports it.

The billboards are the initiative of the super PAC, Southern Progress. The organization promotes progressive legislation and lawmakers in southern states. The group says it will be erecting the first signs in Tallahassee, Orlando, and Jacksonville from today for a month.

Billboards don’t come cheap, so there’s a fundraiser to help cover the costs.

“Over $300,000 in advertising inventory has been pre-approved in Florida for this advertisement. Please make a small contribution now and help us purchase it,” says a message on the campaign website.

“Understand, if you are out protesting this bill you are by definition putting yourself in favor of injecting sexual instruction to 5-, 6- and 7-year-old kids,” DeSantis said at a recent press conference. “I think most people think that’s wrong. I think parents especially think that’s wrong.”

One of those supporting the billboards is Kim Mangone, a former Democratic congressional candidate in California who stood for election in 2020.

“Ron DeSantis and Florida Republicans have pissed us all off,” tweeted Adam Parkhomenko, a Virginia-based Democratic strategist working on the campaign. “So this week we are going to cover the state of Florida in these, in response.”

Parkhomenko’s tweet was picked up by Donald Trump Jr., who took a screenshot of it and tweeted: “I was told by the left/the media you couldn’t say “GAY” in Florida? I guess they were full of shit as usual?!?”

Besides upsetting Don Jr., some others seem traumatized the signs are heading for the sunshine state.