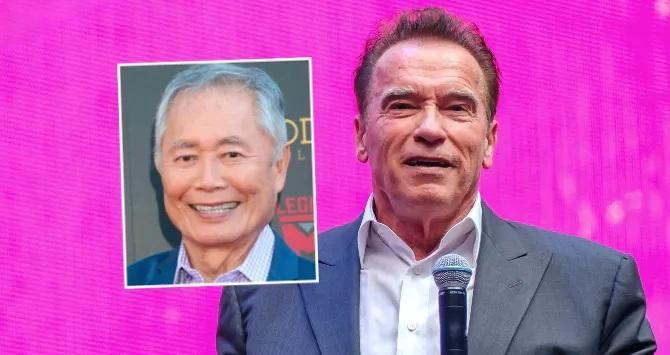 Star Trek legend George Takei is currently appearing on stage in London in his show, Allegiance. This week, he gave an interview to The Stage, the UK’s respected theater industry magazine.

Asked about his decision to come out in 2005, the 85-year-old said anger toward Arnold Schwarzenegger played a key factor. The action star was the governor of California at the time.

Although now a supporter of same-sex marriage, Schwarzenegger, a Republican, was not always so enlightened. As Governor of California, he twice rejected bills, in 2005 and again with a veto in 2007, that would have allowed gay couples in the state to wed.

Takei said, “I was closeted for a long period of my career. I was silent during the AIDS crisis, which fills me with guilt, although I did write checks and checks to AIDS organizations. Why did I come out when I did? Because Schwarzenegger presented himself as a movie star who had worked and was friends with gays and lesbians, many of whom voted for him, but then vetoed that bill.”

“I was so angry that I spoke to the press for the first time as a gay man at the age of 68.”

He went on to say the fear of how his sexuality would impact his acting career was another factor keeping him in the closet.

“Why did it take me so long to come out? Because I’m an actor and I wanted to work,” Takei also said. “I learned at a young age that you couldn’t be an openly gay actor and hope to be employed. And I was already an Asian-American actor, so I was already limited a lot.”

He went on to suggest he knows of others still locked in the closet.

“To this day, there are big Hollywood actors who are not out in order to protect their careers.”

Takei has long been an advocate for civil rights for marginalized groups. Since coming out, he has been consistently vocal about LGBTQ rights.

Talking about his sexuality to Frontiers magazine in 2005, he also revealed he’d been with his partner, Brad, for 18 years. The two men married in 2008.

Allegiance explores Takei’s experiences as a child during World War II. As Japanese Americans, Takei, his brother and parents spent much of the war in a US internment camp.